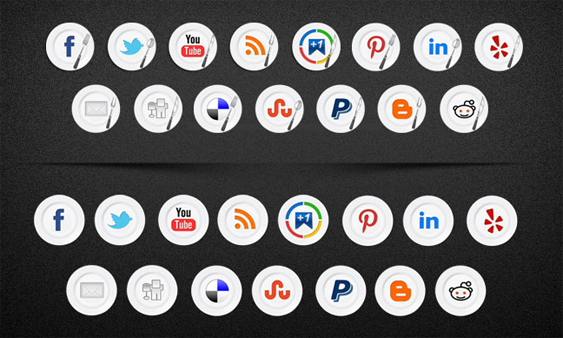 Social Media has become the main ingredient in the recipe that many restaurants use to develop their marketing strategy. This dish is prepared by a multitude of social networks, whose combination depends on the goals set …

In order to increase interactions and get feedback from customers about service and product quality, hospitality companies use Facebook, Twitter, Yelp and Google.

If they want to promote their new dishes, and show the result of their creations, they resort to social networks with greater visual protagonism, such as Instagram, Pinterest or YouTube; Increasing its diffusion through the most media platforms, such as Facebook and Twitter.

In this sector the workers constitute the great ambassadors of the brand, showing their good work and the quality of their dishes through Google, Facebook and Twitter.

In this sector it is essential to maintain direct and fluid contact with customers; So companies are accessible through Twitter, Facebook and Google, both for their regular customers and for new stakeholders.

If the goal is to increase brand awareness and create excitement around it, by organizing actions such as contests, sweepstakes or gifts, a big launch is also launched, using Twitter, Facebook, YouTube, Instagram and Google.

As a way to establish relationships and engage in conversations, both B2B and community members, the media selected are LinkedIn, Twitter, Facebook and Google.

Social networks also serve as a way to attract new workers; Human resources departments use Facebook, Twitter, Google and LinkedIn to do this.

There could be no lack of registration and control of online reputation by these companies, as well as the management of complaints, doubts and suggestions from customers. Here they play a large role Yelp, Google, Facebook and Twitter.

As you can see, the menu offered by restaurants in Social Media is less varied; The key lies in knowing how to take advantage of the potential of each one of them, so that the final result is a juicy management of online communication, which will bring you great benefits both financially and in terms of online reputation.